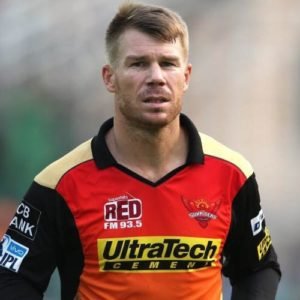 Do you want to know some cool things about David Warner? Well, you have come to the right place. Here you will get to know everything about David Warner from his cricket career to his personal life, his favourites, dating life and more! So, let’s start.

David Warner – as the name says, a warning to the bowler that there is danger ahead. The Australian batsman is one of the most aggressive players to have played the game of cricket. David warner was born on 27th October 1986 in Paddington, Sydney, New South Wales, Australia.

David warner was born in a middle class christian family. Let us look at details regarding the family :

David Warner went through a lot of struggle. When he got his first SS bat, he always had the fear that if he would break it by mistake, his parents would not be able to replace it. Such was the financial situation of the family.

When his pocket money became an issue, David warner had to work in nearby shops to earn some extra money. He often worked till 3 a.m. and then got up for school at 7. He also delivered newspapers on weekends.

David warner learned it the hard way that if you want something, you have to earn it. And surely, this man then earned it all.

Young warner had an anger problem. Yes, the cricketer was aggressive from his childhood, and that is why we sometimes witness a lot of aggression from him on the field.

However, he very well controlled it and today is a respectful player. (Source : david warner 10 interesting facts)

David Warner is one of the fittest cricketers in the world of cricket with amazing body balance while on the field. Here are some of his main body measurements-

David warner wakes up at 5 a.m. for his early morning session which includes  high level endurance training like hill sprint.

David Warner also does exercise like plyometrics, boxing, weight training along with sprinting in his training program. Plyometrics exercise helps in developing strength to increase speed and make muscles powerful.

Warner does weight training to develop strong triceps, forearms and shoulder muscles which are must for batsmen. Boxing helps Warner in body balancing, along with that it also increases power and stamina.

Warner eats food rich in protein and low in carbohydrates. He always avoids eating junk food and prefers to have organic unprocessed food.

David Warner is an inspiration of fitness for many. This is what makes him such a fabulous batsman.

The journey has been beautiful. We will take you through the highlights of David Warner’s incredible cricket journey –

David Warner has made a name for himself in the world of cricket and his earnings reflect that. Let us look at the figures –

Warner’s other sources of income include his association with brands such as Asics, LG, and the Nine Network, as well as Cricket Australia sponsors CBA, VB, KFC, and Optus. He is also a shareholder in a liquor company, active in real estate and owns race horses as well.

Just like all of us, David Warner  loves doing certain things and no doubt, has favourites. Let us find out what he likes!

This is the cover page of the book written by David Warner. To know more about his story, do read it. click here “big switch, the: the kaboom kid series book 1” to buy his book

David warner is currently living in a $2.3 million home in Maroubra. It is a 2 floor building with formal and informal spaces on both upper and lower floors.

It features 4 large bedrooms along with a master suite and a private terrace courtyard.

David Warner also owns luxurious cars such as Lamborghini Huracan which he bought for $450,000.

David Warner and his wife own multi million properties in Australia. Above are some of their investments. (Source : warner multi million dollars property)

This is the wedding picture of David Warner with his wife Candice Warner. They tied the knot in April. 2014.

This is the image of David Warner, his wife and their 3 daughters. According to David warner, he is now quite satisfied and does not want any more children.

Well, well here are some controversies that paint a different picture of warner. Let us have a quick look at them –

watch below video to know about the ball tampering scandal –

watch Warner’s brilliant knock of 335 not out –

David Warner has also won some prestigious awards in his sensational career. Here is the list-

David Warner has a large fan following on all social platforms. If you want to follow him and get regular updates about him, check out the following links –

Due to security purposes, I can’t give you David Warner’s personal email id and mobile number. But you can find his social media profile links and his website link.