If IPL is new for you then it could be possible you will confuse with Delhi Capitals's short name DD.

Delhi Capitals team has retained the old red and blue in the ‎new team . The has been inspired by the of Parliament House‎. Tiger is national animal of India. And the three tigers idea is derived from the Ashok Chakra.

Delhi has moved away from their traditional and have eliminated the red almost completely. The new has tiger stripes in cool blue shades with their at the top featuring three tigers. 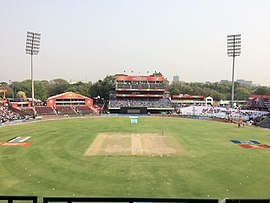 In team leading run scorer is Gautam Gambhir and Amit Mishra is a leading Wicket taker.

Currently , are a principal sponsor whose logo display on front and back of Delhi Capitals jersey.

There are many associate partner of Delhi Capitals team. Associate partners logo display on Arms and top of chest. You can see logos on chest and arms.

The Delhi franchise was sold to the GMR Group for $84 million (Rs 580 crore).

The team changed its from Delhi Daredevils to Delhi Capitals, in December 2018.