If IPL is new for you then it could be possible you will confuse with Rajasthan Royals's short name RR.

The new RR utilizes the old royal blue palette. Similar to its previous counterparts. It reminds the fans of the team they support and the quality that RR represents – Royalty. It also has 2 gold colored lions adorning the frontal half of the . Which represent the royalty and rich cultural of Rajasthan. The new feature on the is the quirky handlebar moustache on the back of the , below numbers. 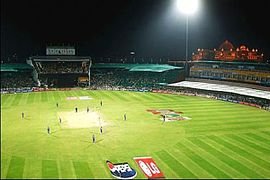 In team leading run scorer is Ajinkya Rahane and Dhawal Kulkarni is a leading Wicket taker.

Currently are a principal sponsor whose logo display on front and back of Rajasthan Royals jersey.

There are many associate partner of Rajasthan Royals team. Associate partners logo display on Arms and top of chest. You can see Red Bull, JK Lakshmi Pro + Cement, KEI Wires & Cables, logos on chest and arms.

The Jaipur franchise was sold to the Emerging Media for $67 million (Rs 460 crore).